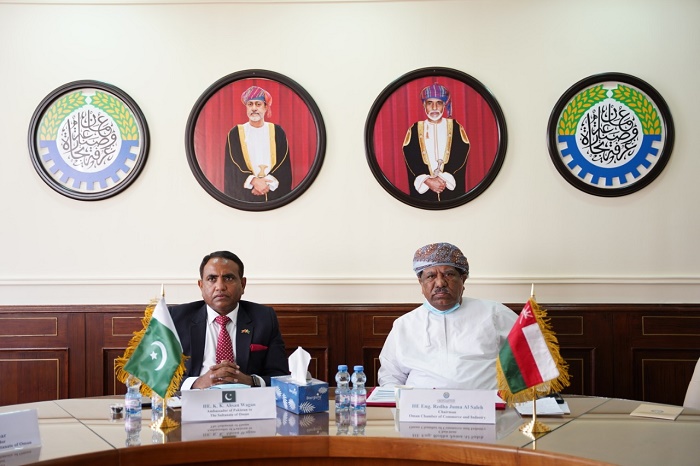 The Pakistani side was represented by Hanif Lakhani, Acting President FPCCI, while from Omani side Eng. Redha Al Saleh, Chairman OCCI led the delegation.

Muscat: Promotion of trade and commerce between Pakistan and Oman was in focus at a  webinar between the trade bodies of the two countries.

Acting President FPCCI congratulated his Omani counterpart upon his appointment as the Chairman OCCI and hoped that the trade relations between Pakistan and Oman would be further strengthened and expanded under the stewardship of Eng. Redha Al Saleh.  The webinar aimed at promoting trade and commercial ties between Islamic Republic of Pakistan and Sultanate of Oman.

Pakistan’s Ambassador to Oman, K. K. Ahsan Wagan, in his opening remarks, highlighted the importance of complementing each other in this era of geo-economics. He mentioned that some of the major impediments in reaching optimal level of bilateral trade are lack of high level visits including visits of business delegations, lack of direct connectivity between two countries and lack of holding trade exhibitions on both sides.

He also talked in detail about CPEC and investment opportunities in Gawador. Chairman OCCI, in his address, also endorsed that there has been fluctuations in bilateral trade levels in recent times and this webinar will pave way for intra-regional trade and increase in number of joint investment projects since Oman has now many business friendly laws in place including Foreign Capital Investment Law, Privatisation Law and Public Private Partnership Law.

Oman’s Ambassador to Pakistan, Sheikh Muhammad Omar Al Marhoon, reiterated that Oman has been and will keep on extending all support to the businessmen from both countries. Both sides reviewed a range of issues of common interest in the field of economic cooperation, emphasised the need of exploring numerous investment opportunities in different fields including fruit, vegetables, pharmaceuticals, meat, mining and construction.The significance of CPEC, Gawador and Duqm Ports, for possible future collaboration, was mutually acknowledged and recognised by all parties.

The segment of open discussion during the webinar included introduction of business people from both Pakistan and Oman for future interactions. Both sides reiterated and encouraged continuation of such webinars/virtual meetings which will lead to increase in bilateral trade and commercial relations.