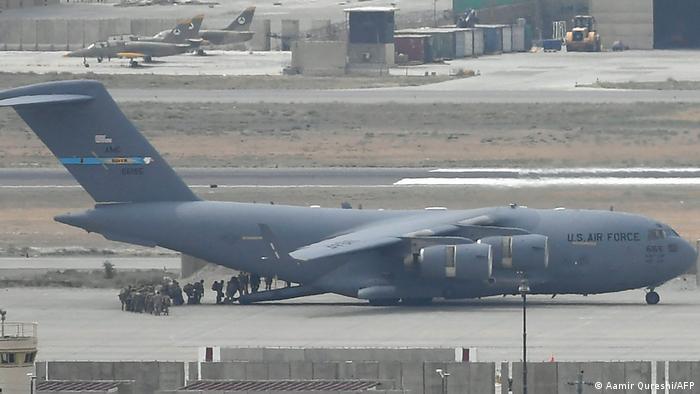 The last US military planes flew out of Afghanistan. According to New York Times, five American C-17 cargo jets flew out of Hamid Karzai International Airport in Kabul on Tuesday morning. US Secretary of State Antony Blinken terms it a beginning of a new chapter of American engagement with Afghanistan.

"It's one in which we will lead with our diplomacy. The military mission is over," he tweeted.

Blinken has announced that the US has suspended diplomatic presence in Kabul and transferred "our operations to Doha, Qatar."

"For the time being, we will use this post in Doha to manage our diplomacy with Afghanistan," he said.

He assured that the United States will continue to support humanitarian aid to the Afghan people.

"It will not flow through the government, but rather through independent organizations, like @UN agencies & NGOs. We expect that those efforts will not be impeded by the Taliban or anyone," he tweeted.

The US' last few days in Afghanistan were marred by a complete takeover by the Taliban, the collapse of the Afghan government, hasty foreign troops evacuation that left behind tens of thousands of Afghans desperate to flee the country, and horrific terrorists attack that killed scores of Afghans.

The Department of Defense has tweeted a picture of Maj. Gen. Chris Donahue, commander of the 82nd Airborne Division, boarding a C-17 to depart Kabul.

On Monday, Gen. Kenneth "Frank" McKenzie, the top general of US Central Command, told reporters that Donahue and the top US diplomat in Kabul, Charge d'Affaires Ross Wilson, were the last two US officials to step off of Afghanistan soil and onto a US military aircraft out of Afghanistan.

According to the New York Times, Taliban terrorists celebrated the "full independence" of Afghanistan. Celebratory gunfire broke out across the city in the predawn hours on Tuesday in Kabul.

"The last American soldiers departed from Kabul airport, and our country has achieved a full independence, thanks to God," Zabihullah Mujahid, the Taliban spokesman, said on Twitter.

Moreover, the control of the airport was left in the hands of the Taliban, who said they were still working on the shape of their new government.

The war in Afghanistan began under former President George Bush following the 9/11 terror attack in the US by al Qaeda terrorists. The nearly two-decade war cost over $2 trillion, took more than 170,000 lives and ultimately failed to defeat the Taliban, the terror group who allowed Al Qaeda to operate there.

As of Monday, more than 122,000 people had been airlifted from Hamid Karzai International Airport since July, Pentagon spokesman John Kirby told reporters, including 5,400 Americans.

President Joe Biden thanked the final US forces serving in Afghanistan for executing the "dangerous retrograde from Afghanistan as scheduled," with no further loss of American lives, in a statement released Monday evening, making the end of the United States' longest war.

"The past 17 days have seen our troops execute the largest airlift in US history, evacuating over 120,000 US citizens, citizens of our allies, and Afghan allies of the United States. They have done it with unmatched courage, professionalism, and resolve," the President wrote in the statement released Monday night.

Secretary of State Antony Blinken lauded the effort of the operation, calling it "one of the most difficult in our nation's history."

Speaking from the State Department, Blinken referenced the various challenges of the mission, noting that what the United States achieved was a "feat of logistics and coordination under some of the most challenging circumstances imaginable."

As US troops leave Afghanistan, the United Nations Security Council approved a resolution for creating a "safe passage" zone for people seeking to leave Afghanistan from Kabul's airport after the US withdrawal from the country.

The Council is relying on the Taliban to secure a safe passage out for Afghans and foreign nationals seeking to leave the country.

Following the adoption of the UN resolution, UN Director at Human Rights Watch Louis Charbonneau issued a statement urging the Taliban to uphold human rights and he called on other countries to "do their part by speedily processing asylum claims and issuing visas for at-risk Afghans so they can resettle."