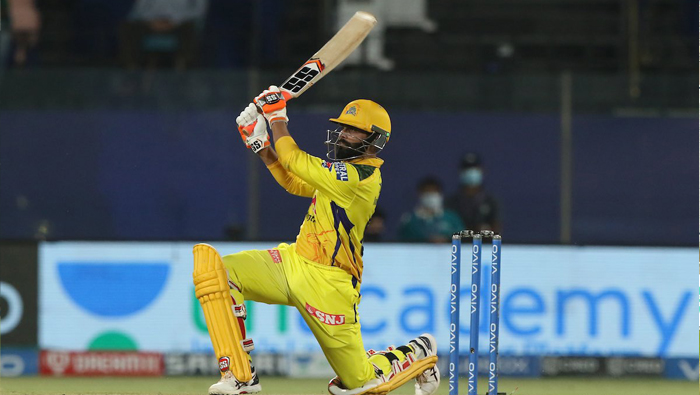 Ravindra Jadeja hit a six over the long leg, followed it with a straight six, then a square drive for a boundary and then one at third man.

Abu Dhabi : Ravindra Jadeja single-handedly took the game away from Kolkata Knight Riders (KKR) in their Indian Premier League encounter at the Sheikh Zayed Stadium on Sunday after he scored 22 runs off the 19th over as Prasidh Krishna looked on haplessly.

The two-wicket win sees Chennai Super Kings (CSK) return to the top of the table. Needing 26 off the last two, CSK took two singles of the first two balls off Prasidh's over before Jadeja went berserk. He hit a six over the long leg, followed it with a straight six, then a square drive for a boundary and then one at third man. By the time the 19th over ended, CSK needed just 4 more runs to make it three consecutive wins.

While Narine did pick two wickets in the 20th over -- Sam Curran and Jadeja -- but it just wasn't enough at the end of the day as Jadeja had already done the damage in the previous over. In the end, he finished with 22 off 8 balls.

Chasing the target of 172, Chennai Super Kings openers Ruturaj Gaikwad and Faf du Plessis provided a perfect start for the team as the duo put 74 run stand for the first wicket.

But then a breakthrough came for KKR when Russell scalped Ruturaj Gaikwad in 8.2 over. After Ruturaj's departure, Moeen Ali smashed Ferguson and Russell in the 10th and 11th over.

Ali and du Plessis were going great as the duo built 28 runs stand for the second wicket, but then CSK lost their second wicket in the form of du Plessis caught by Ferguson and bowled by Prasidh Krishna in 11.3 over at 44 off 30 with 7 fours.

With 2 wickets down CSK now needed 61 runs in 43 balls. However, Moeen Ali and Ambati Rayudu further shaped the innings for CSK as both played sensibly. But then CSK received another blow when Sunil Narine bowled Ambati Rayudu.

After Rayudu Suresh Raina came in and in the very first ball he smashed Narine for four. In 15th over 12 runs came for CSK.

CSK lost its 4th wicket in form of Moeen Ali in the 17th over bowled by Ferguson at 32. In the very next over Suresh Raina was run out. Dhoni soon followed him in the same over.

With CSK needing 26 off the last two, Jadeja took matters into his own hands and helped his team across the victory line.

Chennai Super Kings got an early breakthrough after Kolkata Knight Riders opener Shubman Gill was run out by Ambati Rayudu in the very first over. Gill's innings ended for 9 off 5 with 2 fours.

After Gill's departure, Venkatesh Iyer and Rahul Tripathi put 40 runs on the board for the second wicket, but Iyer's stay at the wicket lasted for a brief period as he was caught behind by Dhoni at 18 but decided to opt for a review.

However, there was a clear spike on the UltraEdge and the on-field decision stayed. KKR lost their only review and also both their openers.

Skipper, Eoin Morgan and Rahul Tripathi's third-wicket stand lasted for 20 runs, but then Morgan was caught at the long-on fence by du Plessis on the bowling of Hazlewood in the 10th over.

Ravindra Jadeja scalped Tripathi in the 13th over. Nitish Rana and Andre Russell looked confident to keep the scoreboard ticking as the duo hit one six each in the 14th and 15th over. Russell then smashed Curran for two fours in the same over.

The fifth wicket of KKR fell in form of Andre Russell picked by Shardul Thakur in the 17th over. Russell walked back after scoring 20 off 15 with 2 fours and a six. Dinesh Karthik was the last batter to walk back to the pavilion in the 19.4 over.