Exercising for even three seconds a day has great health benefits 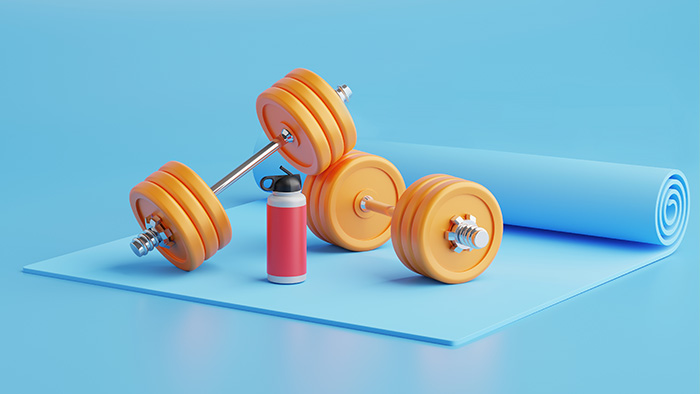 Weight training or resistance training has been known to have many benefits including building muscle, burning body fat, strengthening your bones and joints, reducing injury risk, and improving heart health. A new study from Edith Cowan University (ECU) has discovered that lifting weights for as little as three seconds a day can have a positive impact on muscle strength.

The study titled, 'Effect of daily 3-s maximum voluntary isometric, concentric or eccentric contraction on elbow flexor strength' was published in the 'Scandinavian Journal of Medicine and Science in Sports'.
A collaboration with researchers from Niigata University of Health and Welfare (NUHW) in Japan had 39 healthy university students perform one muscle contraction at maximum effort for three seconds per day, for five days a week over four weeks.

The participants performed either an isometric, concentric or eccentric bicep curl (see definitions below) at maximum effort, while researchers measured the muscles' maximum voluntary contraction strength before and after the four-week period.

Another 13 students performed no exercise over the same period and were also measured before and after the four weeks.

Muscle strength increased more than 10 per cent for the group who performed the eccentric bicep curl after the four weeks, but less increase in muscle strength was found for the other two exercise groups.

The no exercise group saw no increase.

"The study results suggest that a very small amount of exercise stimulus - even 60 seconds in four weeks - can increase muscle strength," he said.

"Many people think you have to spend a lot of time exercising, but it's not the case. Short, good quality exercise can still be good for your body and every muscle contraction counts."

These three classifications relate to what the muscle is doing when being activated.

For a bicep curl, a dumbbell held with an arm by one's side, before lifting the weight upwards towards the chest and then lowering it back down via the elbow.

The study showed that all three lifting methods had some benefit to muscle strength, however eccentric contraction easily produced the best results.

The concentric lifting group improved slightly (6.3 per cent) in isometric strength but saw no improvement elsewhere, while the isometric group only saw an increase in eccentric strength (7.2 per cent).

However, the eccentric group saw significant improvements in strength across all three measurements: concentric increased 12.8 per cent, isometric 10.2 per cent and eccentric 12.2 per cent.

The eccentric group's overall muscle strength improved 11.5 per cent after 60 seconds of effort in total.

"Although the mechanisms underpinning eccentric contraction's potent effects are not clear yet, the fact only a three-second maximal eccentric contraction a day improves muscle strength in a relatively short period is important for health and fitness," Professor Nosaka said.

Professor Nosaka said the findings were exciting for promoting physical fitness and health, such as prevention of sarcopenia - a decrease in muscle mass and strength with aging.

"We haven't investigated other muscles yet, but if we find the three-second rule also applies to other muscles then you might be able to do a whole-body exercise in less than 30 seconds," he said.

"Also, performing only one maximal contraction per day means you don't get sore afterwards," he concluded. Professor Nosaka and NUHW's Dr Masatoshi Nakamura designed the study and the data were collected by Dr Nakamura and his PhD and Masters students. (ANI)