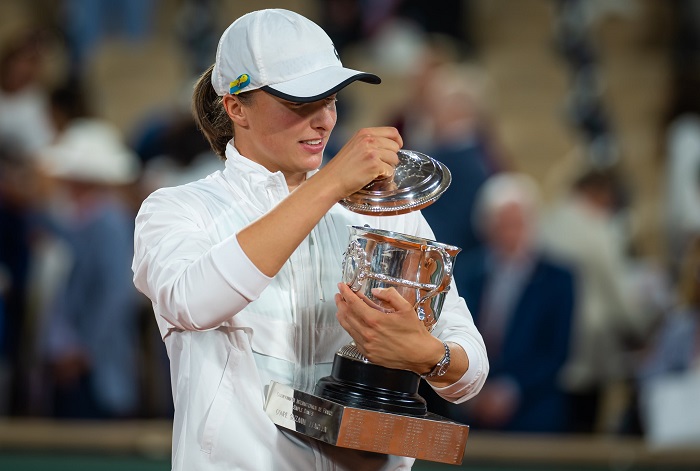 London: Iga Swiatek will be the women's singles top seed when the Wimbledon 2022 will get underway on June 27.

The singles and doubles seeding lists were announced on Tuesday ahead of the draw ceremony on Friday morning. Polish world No.1 Swiatek enters the tournament on the back of a 35-match winning streak after claiming her second Roland-Garros trophy in early June. She has won her last six events and has not lost a match since mid-February.

Swiatek has never been past the fourth round at the All England Club but the 21-year-old won the girls' singles title in 2018.

Last year's ladies' singles champion, Ashleigh Barty, announced her sudden retirement in March and therefore won't be back to defend her title.

Estonia's Anett Kontaveit will anchor the ladies' draw as the No.2 seed, with Tunisia's recent Berlin grass court champion Ons Jabeur the third seed ahead of Spanish No.4 seed Paula Badosa. Last year's ladies' runner-up, Karolina Pliskova, is sixth in the list.

Four recent former champions will attract attention once play gets underway. The 2017 champion Garbine Muguruza gets the No.9 seeding, 2018 winner Angelique Kerber will be seeded No.15, one spot ahead of 2019 champion Simona Halep. Czech lefty Petra Kvitova, twice a Wimbledon champion, finds herself 25th in the seedings list.

Brazil's Beatriz Haddad Maia is seeded at a slam for the first time in her career after winning two titles on grass in two weeks, in Nottingham and Birmingham. She now has a career-high ranking of No.29 and is seeded No.23.

Serena Williams, seven times a Wimbledon singles champion, will be the unseeded name everyone will be looking for when the ladies' draw is made. The 40-year-old hasn't played since she was forced to retire during her opening match at the 2021 Championships.

Others to follow closely include the twice quarter-finalist Karolina Muchova, Canada's 2019 US Open champion Bianca Andreescu and Croatia's Donna Vekic, who is a former WTA grass court title winner and who reached the fourth round at the Championships in 2018.

Novak Djokovic, the defending champion, is men's top seed and will aim to win a seventh singles title and 21st grand slam in all. The 2008 and 2010 champion Rafael Nadal is back as the No.2 seed after winning the opening two Grand Slams of the year in Melbourne and Paris, taking his tally to 22.

Italy's 2021 Wimbledon runner-up Matteo Berrettini, who has won two grass tournaments in two weeks since his return from hand surgery, secures the No.8 seeding. Spanish sensation Carlos Alcaraz - a winner of four ATP titles this year - is the No.5 seed.