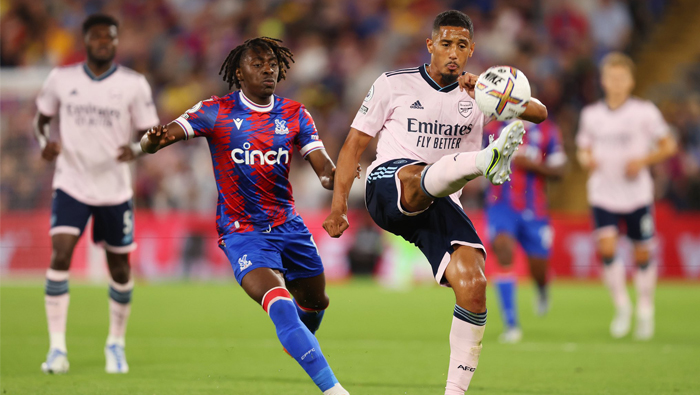 London : Arsenal won the first premier league match of 2022-23 season 2-0 over Crystal Palace at the Selhurst Park Stadium on Friday.

Gabriel Martinelli's header and an own goal from Palace's centre-back Marc Guehi won Arsenal the first three points of their campaign. After an excellent pre-season campaign, the North-London side delivered in the first game of the season too. The scorecard might show the game as a comfortable 2-0 win for Arsenal but it wasn't that easy. The game was hard fought by Patrice Vieira's side but they failed to convert their chances. Both the teams had two shots on the target but Arsenal was able to make their chances count.

The first major chance came from Arsenal within three minutes from a loose pass from Wilfried Zaha as Palace side lost the ball in their own half. Gabriel Jesus drove the ball forward shielding from the first player and then beating two players with staggering dribbling skills. Leading the ball into the 18-yard box, the striker attempted a shot but it was blocked by Guehi. The deflected shot came straight into the path of Martinelli but his shot rolled wide.

Another sloppy loss of possession in their own half resulted in a chance for Arsenal. Martinelli passed the ball to the left side to new Arsenal left-back Zinchenko who cut in and tried a shot but it was punched away by Palace Goalkeeper, Vicente Guaita.

The goal finally came through for Arsenal in the 20th minute from a cross. Saka's cross went straight to Zinchenko who was completely unmarked. The left-back headed the ball in front of the goal for their teammates. The ball was too high for the first two players but came straight to the head of Martinelli who headed it in goal for Arsenal.

The first chance came through for Crystal Palace in the 42nd minute as a freekick from Eze set-up as Anderson created a chance for Edouard who tried a header but Ramsdale was able to block the effort.

Sloppy defending from Arsenal resulted in a chance for Edouard but the striker was surrounded by too many players and his shot got deflected in the extra time of the first half. The score stood 1-0 for Arsenal at the end of the first half.

The second half started with an amazing chance for Crystal Palace as Zaha put a through ball for Eze on the left flank who was on a run. Eze turned in and tried a shot but it was yet again saved by Ramsdale.

Palace lost hold of the ball yet again releasing Jesus for a chance on the right flank. The striker put the ball in for Odegaard who attempted a pass in front of the goal but it was blocked. The deflected ball came through to Jesus and he attempted a shot that went wide.

Arsenal made the score 2-0 in the 85th minute. The visitors worked the ball in Palace's half quickly and caught the defence lacking. Eddie Nketiah who was just substituted in the game for Jesus two minutes ago passed the ball wide to Saka who made a run on the right flank. Saka turned in and attempted and attempted a short cross from within the penalty box. An attempt from Guehi was made to clear the ball outside but it didn't quite go through as he would've wanted and resulted in an own goal.

The hosts are bound to be disappointed with the result as they dominated the ball in possession and made a couple of chances as well but could not convert them into goals.