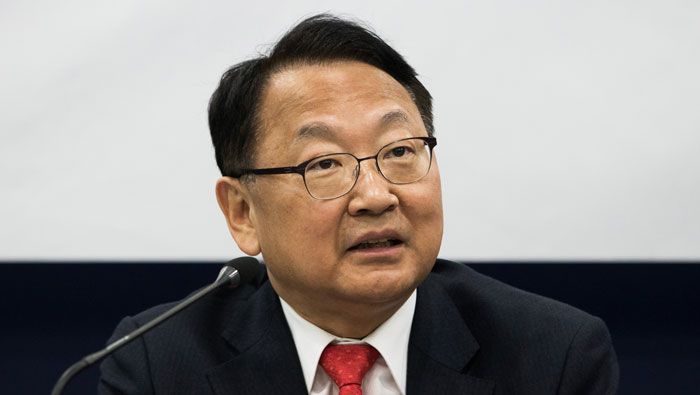 Seoul: South Korea's government and airline companies will meet on Tuesday to discuss China's rejection of applications by Korean carriers to add charter flights between the two countries for early this year, a government official said on Monday.
South Korean Finance Minister Yoo Il-ho said on Sunday he would look into whether China's decision, which came ahead of a traditional surge in Lunar New Year travel, was "related to" the planned deployment of a US anti-missile system in South Korea.
Yoo told reporters there were "several suspected cases of non-tariff barriers" following last year's decision to deploy the US Terminal High Altitude Area Defence (THAAD) system and South Korea needed to determine China's "real intention".
China's foreign ministry did not immediately respond to a request for comment on a holiday, while China's Civil Aviation Administration was not immediately reachable.
China worries that the THAAD's powerful radar can penetrate its territory and has objected to the deployment, which South Korea and the United States say is aimed solely at countering any threat from North Korea.
South Korean carriers Asiana Airlines, Jeju Air and Jin Air, an affiliate of Korean Air Lines, said their applications for charter flights to China were rejected for January and February, with no reason given.
"It is regrettable," a spokesman at Jeju Air said.
The companies already operate scheduled flights to China but wanted to add charter flights at busy times.
The transport ministry had sent a letter to China's ministry seeking cooperation on the proposed flights and it would also meet the companies to ponder a next step, a ministry official said.
"We will hold a closed-meeting with major airline affiliates tomorrow morning to discuss measures," the ministry official said, without elaborating on what type of measures might be considered.
China Eastern Airlines and China Southern Airlines had asked South Korea to hold off on approving their applications to add charter flights in January, citing "a situation in China", said the official who is not authorised to speak to media and declined to be identified.
A China Eastern press official denied that it had asked South Korea to hold off approving applications to add charter flights. A China Southern media official was not immediately available.
The Korea Tourism Organization said charter flights typically accounted for 4 to 5 per cent of available seats between the two countries.
"Travellers can switch over to regular scheduled flights, so we do not expect huge losses," said Han Hwa-joon, China team director.
Shares in South Korean cosmetics-related companies and airlines dropped on news reports of the charter denials. Korean cosmetics are a hot-selling item for visitors from China, South Korea's biggest source of tourists.
Shares in cosmetics maker Amorepacific Corp were down 5 per cent on Monday, their biggest daily percentage loss since October 25 and Korean Air Lines Co Ltd shares fell 2.2 per cent to their lowest level since July 14.