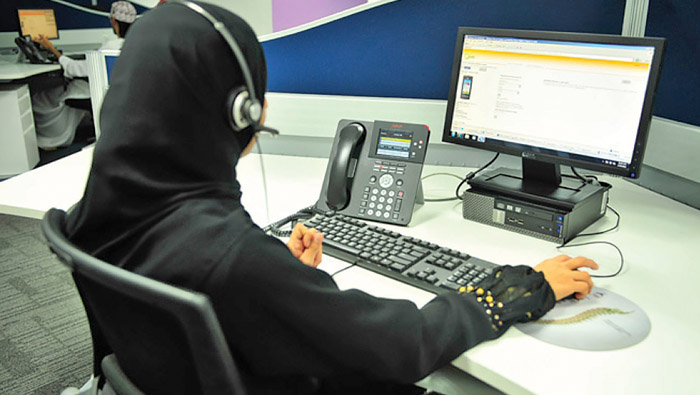 Muscat: The average monthly income of Omani women increased by 162 per cent between 2010 and 2016, according to the National Centre for Statistics and Information (NCSI).
The centre issued an “Omani women’s empowerment guide”, which showcases the development of Omani women between 2010 and 2016.
In 2010, the average salary for women was OMR292, while in 2016, the amount increased to OMR765. “This came as a result of the amendment of monthly wage systems in the Sultanate in the past,” NCSI said.
“This is a great achievement for women,” Nawar Assaidi, a private sector employee, said, adding, “I think the reason for this increase is due to the changes in wages in the public sector. The salary adjustment that took place in the civil service led to the spike; this includes changes made in the wages in the health and education sectors.”
“With regard to the private sector, there are companies that pay their skilled female employees very well, while others do not, and therefore it depends on the qualifications and skills of the female employee,” added Assaidi.
In line with the Sultanate’s goal to empower women, His Majesty Sultan Qaboos bin Said issued a Royal decree earlier this month, which ratified Oman’s commitment towards equality for women.
The decree No. 3/2019 ratifies an amendment to the “Convention on the Elimination of All Forms of Discrimination Against Women” and withdraws some of the Sultanate’s reservations to the agreement.
Article 1 ratifies the amendment to Clause 1 of Article 20 of the convention. The new decree also instructed the departments concerned to take necessary measures to implement the provision of the two articles mentioned above.
In the political sphere, the data revealed that the percentage of women in the state council decreased from 19 per cent in 2010 to 16 per cent in 2016. However, female participation in the Shura and Municipal councils increased by 1.2 per cent and 3.5 per cent, respectively.
In 2016, Northern Batinah recorded the highest index of female empowerment with 3.42, while Al Wusta recorded the lowest with 0.33.
The index was measured on a scale of 1 to 4. In 2010, Al Buraimi recorded the highest value for the Empowerment of Women Index with 3.42, while the lowest 1.5 was recorded in Al-Wusta Governorate. In general, the value of the index for 2016 recorded a higher variation between governorates compared to 2010.
In 2016, Northern Al Batinah advanced in the women’s empowerment index from fourth in 2010 to the first place. “This progress is due to several reasons, as evidenced by the indicators adopted in the guide, the most important being the gap in favour of women in supervisory positions,” NCSI said. The governorate also has the lowest rate of jobseekers and the third highest average income for female workers, which rose by OMR517 to reach 824 in 2016.
With regard to Muscat, the governorate declined in its ranking from second to third place. However, Muscat ranked first in the lowest rate of illiteracy among women and the lowest rate of female jobseekers.
Muscat also held the highest proportion of women in supervisory positions of the all-female workers and ranked second among all governorates when it came to women with secondary education and higher education.
“The difference between the average salary of men and the average salary of women is slight, which could have been caused by upgrades. Men are more likely to be promoted than women. However, this isn’t true for large private companies such as petroleum companies that have women in high managerial positions,” said Assaidi.
Private sector
On how women should continue to break boundaries, Assaidi said, “Women must strive to empower themselves and their skills to gain higher positions in the private sector. So far, only one woman occupied the position of Chief Executive Officer; we hope that it will increase in the coming years.”
“Additionally, membership in the Shura Council is limited to only one woman. A solution to this could be for women to demonstrate their abilities and trustworthiness through social work and precise planning of the election campaign,” Assaidi added.
With regard to social security, Royal Decree No. 84/87 guaranteed women the right to a social security allowance for a number of categories, including divorcees, women who are unable to work, women who were abandoned by their husbands, widows, unmarried women and older women. This is provided that they do not have a sufficient source of income or dependents who are able to support themselves.
Muna Al Shukairi, a businesswoman, said,” Over the decades, Omani women have excelled in the political, social and economic spheres. Women have gone from being dependent to independent.”
With regard to the work environment, she said, “Women are involved in the workplace and now play a vital role. When given an opportunity, women will always work hard in order to prove their presence.”
“I believe that education has contributed significantly to the advancement of women in terms of skills, which has allowed this increase in wages,” said Al Shukairi.
“In the olden days, women weren’t allowed to learn, but even when they started learning, the majority decided to become teachers. But now, as times have changed, parents have begun realising how important education is to improve living standards,” Al Shukairi added.